Lipoic acid is an antioxidant found in certain foods, including red meat, spinach, broccoli, potatoes, yams, carrots, beets, and yeast. It is also made in small amounts in the human body.

Lipoic acid plays an important role in metabolism or the way that cells process chemicals in the body. Recent research has shown it is helpful in treating nerve damage in diabetics. it may have benefit for other conditions as well. There is no reliable scientific evidence at this time that lipoic acid prevents the development or spread of cancer. Its possible role as a complementary therapy to reduce the side effects of radiation therapy or chemotherapy is still unclear.

How is it promoted for use?

Lipoic acid is an antioxidant that is promoted to protect the body against cancer and other diseases. An antioxidant is a compound that blocks the action of free radicals, activated oxygen molecules that can damage cells. Oxidation may also play a role in causing poor health as people age, and some researchers suggest that lipoic acid may be helpful in slowing the aging process.
Lipoic acid has been used to treat diabetic polyneuropathy, a nerve disease affecting many diabetics that causes pain and numbness in the hands and feet. Research suggests lipoic acid may also lower blood sugar levels.

Regarded as a powerful antioxidant, lipoic acid is claimed to strengthen the effects of other antioxidants (such as vitamins C and E) and to regenerate antioxidants used up in the fight against free radicals. it has also been promoted to prevent or treat liver diseases, cataracts, and to reduce the risk of plaque formation in the arteries.

Some proponents believe that lipoic acid may inhibit genes that trigger cancer cells to grow, and some recommend it as one component of an alternative anti-cancer regimen or as a complementary therapy to prevent or relieve some side effects of conventional cancer treatments. Researchers have begun to look at whether lipoic acid can help prevent nerve damage from the use of certain chemotherapy drugs.

What does it involve?

Lipoic acid can be obtained from foods, and the body also produces it naturally. As a person ages, his or her body produces less lipoic acid.
Supplements are available as capsules and tablets and are sold in health food stores and on the internet. Many studies have used an injectable form of the nutrient. A safe and effective dosage of this supplement has not been firmly established. Most studies have used doses of 300 to 600 milligrams (mg) daily. High doses of any antioxidant supplement may actually cause Cell damage.

What is the history behind it?

In 1937, scientists found certain bacteria contained a compound that was later characterized as lipoic acid. The antioxidant activity of lipoic acid has been known and studied since 1939. In 1957, lipoic acid was found in yeast extracts. At one time it was thought to be a vitamin (a substance the body needs but usually cannot make on its own), but it was later discovered that the body does make lipoic acid.

What is the evidence?

There are no studies in humans convincingly showing that lipoic acid supplements prevent the development or progression of cancer. One individual report of a patient receiving an alternative regimen including lipoic acid has been published. However, while a number of well-documented case reports with consistent results might suggest value in conducting clinical trials, a single case report is not very helpful in assessing the safety or effectiveness of any treatment.
Early studies of cells grown in the laboratory have suggested that lipoic acid may cause cancer cells to self-destruct, a process known as apoptosis. Much more research will be needed to determine if it has similar effects in animals and people.

There have been some encouraging results in small animal and human studies on the ability of lipoic acid to reduce some harmful side effects of chemotherapy. Some chemotherapy drugs can damage nerve cells in the body, which can lead to a condition called peripheral neuropathy, in which patients feel pain or other abnormal sensations, usually in the hands or feet. In a small Austrian study, 8 of 15 patients who received lipoic acid after taking the chemotherapy drug oxaliplatin reported improved symptoms. The researchers suggested larger studies should look into this effect. One study of rats suggests that lipoic acid might help reduce heart muscle damage caused by some chemotherapy drugs. A 2006 publication reported that a combination of anti-oxidants including lipoic acid helped people with advanced cancer regain appetite and body weight.

Studies have also looked at the use of lipoic acid for other conditions. In a recent review article, researchers reported that a number of studies have found lipoic acid to be useful in treating nerve problems in diabetics and that it can improve insulin sensitivity in people with Type Il diabetes. Other studies have suggested that it might be useful in liver disease. Early laboratory and animal studies have also suggested that lipoic acid may be helpful in treating stroke, cataract formation, nerve damage from HIV infection, some nervous system diseases (such as Alzheimer disease), and radiation injury. it may also help people with high cholesterol levels. Studies in people are now under way to determine whether lipoic acid can help with these conditions.

Are there any possible problems or complications?

This product is sold as a dietary supplement in the United States. Unlike drugs (which must be tested before being allowed to be sold), the Companies that make Supplements are not required to prove to the Food and Drug Administration that their supplements are safe or effective, as long as they don’t claim the supplements can prevent treat, or cure any specific disease. Some such products may not contain the amount of the herb or substance that is written on the label, and some may include other substances (contaminants). Actual amounts per dose may vary between brands or even between different batches of the same brand. Most such supplements have not been tested to find out if they interact with medicines, foods, or other herbs and Supplements. Even though some reports of interactions and harmful effects may be published, full studies of interactions and effects are not often available. Because of these limitations, any information on ill effects and interactions below should be considered incomplete. Lipoic acid found naturally in foods is safe. Research has shown that 300 to 600 mg of lipoic acid a day may be safely taken with very few side effects, although some people have reported upset stomachs or skin rashes. High doses of lipoic acid supplements may lower blood Sugar levels, something diabetics should be aware of.

Because it is a powerful antioxidant, there are concerns that lipoic acid could make radiation therapy or chemotherapy less effective. While this concern is based largely on theories of how cancer treatments work, it is supported by some recent studies. For this reason, people being treated for cancer should speak with their doctors before taking this supplement.
The effects of long-term use of this supplement are unknown. Women who are pregnant or breast-feeding should talk with their doctor before taking this supplement. Relying on this type of treatment alone, and avoiding or delaying conventional medical care for cancer, may have serious health consequences.

There are no reviews yet.

Be the first to review “Lipoic Acid” Cancel reply 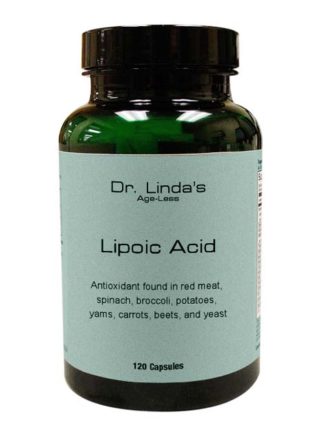